So, what does one do when one has finished watching a movie, or is enjoying a certain TV show, or has just read a particularly compelling book?

Why, one makes LEGO men of the main characters, of course, for re-enactment purposes.

Recently we caved and let the Captain read The Hunger Games (“But moooooooom, EVERYONE else has read it already!!”). As with everyone else in the world, he devoured it in about three days. The Captain is not big into reading, and although he is allowed to stay up late if he would like to read, he often chooses to just go to bed rather than crack open a book. The only exceptions to this rule so far have been a few books you possibly have heard of – the Harry Potter series, the Percy Jackson series, and now, The Hunger Games. What is it about some books that just have that page-turning, imagination-grabbing quality? If only they could bottle that and sell it.

Anyway, once The Hunger Games was finished, the LEGO version began.

Here is Peeta and Katniss, complete with victory medals:

What’s this? Thresh shows up to do battle with Kato. (SPOILER ALERT: not going to end well for one of them.)

Leaving the lovers free to do kissy stuff. (The Captain refused to allow me a more graphic pose. Hand holding LEGO minifigs is NOT COOL, MOM.)

Meanwhile, we have been watching the X-Men animated series from the early 90s on Netflix. Sir Monkeypants and I LOVED this series as fresh newlyweds. We’d get up every Saturday morning (um…it was TECHNICALLY still morning) and we’d make a fresh batch of oatmeal chocolate chip muffins, sit down with a half-dozen each and a huge coffee, and turn on X-Men. It was a serious ritual. His favourite was Cyclops. Mine was Rogue. (Top secret: also had a small crush on Gambit. WHAT, animated characters are TOTALLY FAIR GAME and NOT WEIRD AT ALL.)

Nerd alert: check out the awesome fonts in that opening! Someone likes typography.

Anyway, the older two kids are loving it (Little Miss Sunshine’s review: “I am tired of all these random people doing random things to random other people, and I am going upstairs now to play puppies.”). So you know what that means – Gal Smiley broke out the LEGO. 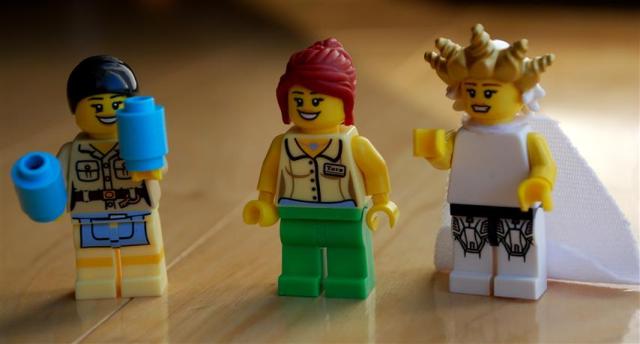 Watch out, Professor! Magneto is right behind you! Oh, didn’t realize you had actually invited him over for a game of whist. Carry on.

The Gal’s personal favourite, Colossus, chats it up with Wolverine (the white pieces are his claws) and Gambit.

I just knew our massive collection of minifigs had some purpose.**

** Already outnumbered at our house by a factor of about a thousand.

Had to stop at the library and walked right past this display of short stories. Luckily my daughter spotted it! I didn't even know they had a copy.
We finished charting season three. Derek got a small bump by pulling Meredith out of the ocean before blowing it again, and Izzie and George are tanking. Now it's on to season 4 where we are playing New Intern Roulette...which ones will last the longest? Place your bets! #greysanatomy
I did suggest she get a bigger bowl but she is rather stubborn.
We finished ranking season two. Poor Derek...will he ever get out of the basement?
They're still allergic.
Waiting for Waitress. Next year, we really have to splurge on better seats...or many pairs of binoculars.
December 2019.
Fondue prep.
I have a growing teacup collection and my sister got me this Royal Albert one she saw online, just because. It's my new favourite. #royalalbertchina
Rainy night at Wesley Clover Park but the Magic of Lights was still cool.