In today’s Getting Older news, I think I am at the point where I want to stop dying my hair.

There is a history of early grey in my family, and I’ve had scraggly grey hairs since I turned 30 (famously, my husband plucked my first ever white hair from the back of my head at my own 30th birthday party, and I wailed in horror over it for like, half an hour before being comforted with cake). I’ve been dying it since just after I had Little Miss Sunshine, because I hated the weird striped look. It’s been about ten years of Nice and Easy every six weeks.

But lately I have become tired with the process, the smell, the toll on my hair, the roots. I’ve been looking long and hard at my roots every time dying time comes around, to try to determine what the current percentage is of white, and whether that’s enough to go gracefully all-grey.

It’s really hard to say, but I think my hair is now mainly grey with white bits, and very little of the original brown. I should have dyed it a couple of weeks ago, but when the day came I just…didn’t. And now it’s been about 10 weeks, and I’m of a mind to just kind of see where this is going, and if I like it. Already I can say that a) I do not mind at all not going through the dying process, and b) my hair seems healthier and less brittle already, so that’s good.

Susan Sarandon is now 71, but still rocking the red hair, which cannot possibly be natural. But on the other hand, I so strongly associate her with being a redhead that I would support her continuing to dye it until she is an invalid in a wheelchair with feathered lipstick. Rock it, Susan. 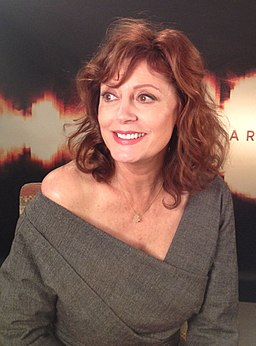 Helen Mirren was a natural blonde in her youth, which I think makes the transition to grey easier. Still, looking at photos, it seems she was still tinting it a golden colour up until two or three years ago. Now that she’s 73, she’s been appearing more often with a solid head of pure white hair, but of course she looks amazing.

Judi Dench had dark hair as a young woman and it seems she was not too fussy about embracing the grey. Pictures of her at age 50 or so still show her with longish brown hair, but shortly after that she went super short and let it go grey, the way we think of her today. By the time she won the Oscar for Shakespeare in Love – she was 54 at the time – she was all white/grey and looking like a boss. Today she’s 83 and the very definition of no-nonsense.

Frances McDormand is an awesome inspiration here too. She famously has said that she intends to age gracefully and not try to hide it at all. She was still dying her hair at age 40 (short and dark brown), but by age 45 she’d gone super short and mostly grey with a blonde tint, and now at age 61 she’s totally grey and looking amazing.

And in real life, I am inspired by my friend Lisa (hi Lisa!), who is my age and has long curly hair that is now a gorgeous salt and pepper. She recently had head shots taken and she looked so elegant and powerful that I thought, that could be me too.

I’ll be 48 in a few months, and 50 isn’t that far away, and 50 does not seem too young to have grey hair, regardless of what the majority of Hollywood says. I know it’s going to make me look older. Maybe even all the way to “old.” But it’s who I am, and I like who I am, and I’m ready to go for it.

9 thoughts on “Rocking The Grey”