Time for another board game review! You know what would be awesome? If I started up a YouTube channel with board game overviews and it was hilariously wooden and bad like “Fun with Flags” from The Big Bang Theory, and just for the record, I would TOTALLY WATCH “Fun with Flags” because I am THAT MUCH of a flag geek. I am half thinking of doing it – episodes would come out once every five weeks immediately after I have touched up my hair roots. Who wants to be my co-host?

Anyway, today we are discussing Ticket to Ride, which if you are into board games, you probably already own. It’s a top-seller – I saw it at Mrs. Tiggy Winkles the other day and the box had a “3 million copies sold worldwide” sticker on it, and I think it’s very close to making the transition from a specialty-store-only type item to a Walmart-carries-it kind of item.

If you are interested in board games but aren’t sure if your family is ready for something more advanced than Sorry or Monopoly, than this game is absolutely, 100% the place to start. It makes the top 10 list of many gaming review sites, it’s fun and fairly easy to learn, and if you like it, you’ll know you’re a strategy gamer.

First let me mention, there’s several variations on the game you can buy. Ticket to Ride is a map-based game, and there are a bunch of different editions featuring maps of different parts of the world. The original one is a map of the United States; we own the Europe version which is the map you’ll see in my pictures here. Each version is played basically the same but there are subtle variations on the rules, and that often means there’s different combinations of players. The original and Europe version are for 2 to 5 players, but other versions are played in pairs, or with larger groups of people. 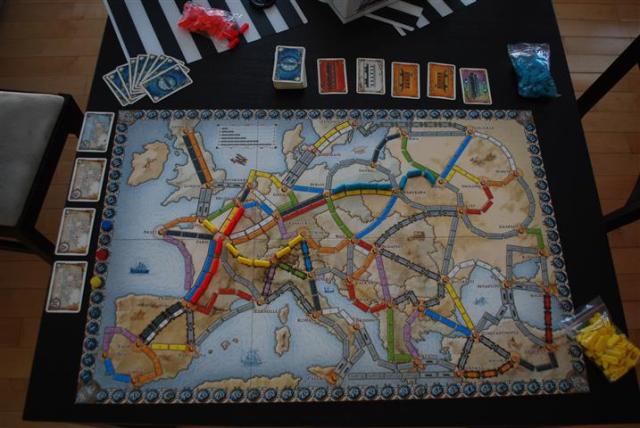 The box recommends ages 8 and up and that always surprises me, as I find it to be a challenging game and when we play with our youngest (who is 8) I always assume she is not going to be able to plot out her own strategy. But actually she plays just fine, so I guess that’s my own baggage. So we’ll say ages 8 and up with the caveat that those under 10 might need some strategy advice.

The idea behind Ticket to Ride is that you’ll be building train lines that connect different cities on the map. First, you draw for yourself a secret set of “tickets,” which are like jobs you need to fulfill – two cities that you need to connect with your trains. The tickets are worth different amounts – cities that are far apart and tough to connect are a higher-point-value ticket. You can have, and should have, several tickets on the go at once – the ideal is to have a few tickets that overlap or share a city, so you can work on them in concert (this is the part I find my youngest has trouble with – she usually works on just one ticket at a time.)

(I’ve shown the tickets face-up here in my photos just so you can see them, but in the real game they’d be in your hand or face down as they are meant to be a secret from the other players.)

Once you have tickets in hand, and a potential route that connects all your cities in mind, you need to start “claiming” the train routes in chunks. Each chunk has a number of slots and a colour, and you need to collect cards of that colour set to claim that chunk. On your turn, you’ll be able to take up to two colour cards from the set on the board, or, if you have collected a complete set, you can claim a segment of the map instead.

For example, if I want to connect Pamploma to Marseille on the Europe map, I’ll need to collect a set of four red cards. I can then play my four red cards and grab that section of the map by putting my trains on that segment. Then I can slowly grab more and more segments until my entire chain is complete, and I’ve fulfilled my tickets.

If I still have trains left, I can then take additional tickets and make some new routes. Play continues until someone is out of trains to place on the board.

A key part of the game is that if a segment you were counting on taking is taken by someone else, then you’re in trouble. You need to find a way around instead, and change your train route strategy on the fly.

The winner is the player with the most points when the game ends. You get points for each completed ticket; incomplete tickets are subtracted off. Each segment on the board you take earns you points, too. There’s also bonus points for the player with the longest train (in some editions). You keep track of your points from segments during the game using the numbers around the edge of the board; you add in your ticket points at the end of the game.

Why We Love It

As I’ve said above, Ticket To Ride is like a gateway drug to gaming – it’s easy enough to learn that you can pick it up quickly; once you know it, you can play a game in 45 minutes or so, so it’s easy to get out after dinner. It’s complex enough for the adults to enjoy and there’s a bit of a competitive angle too – trying to grab train segments before others do.

I love the strategy, and I also love way this game is very visual – something that is easy for kids to see and understand. Plus, side bonus: my kids now know the names of several cities in Europe. It’s educational!

It can be frustrating at times when someone takes the segment you really, really needed, but the good news is that a) there’s almost always a way to work around it, and b) it’s never personal – they are just trying to achieve their own secret tickets. So it’s still pretty fun, and there have been times I’ve been hopelessly losing but still had a good time.

Although it’s usually pretty clear cut who is winning, because the tickets are a secret there are sometimes surprises at the end so hope is never completely lost. Plus, the game is quick enough that if you do lose, there’s usually time for a best-two-out-of-three scenario.

One thing I will say about Ticket To Ride is that it has a kick-ass app version, and it has almost spoiled the board game version for us. Playing it on an app means the setup and cleanup is non-existent – no more little trains going flying when the board gets bumped – and with the computer keeping score, you never have to worry about whether or not you marked the points for that last segment you claimed or not. If you get the app you can network with other players, both locally and online, so we can each grab an iPod or iPad and set up a digital game inside the house on our own local network and all join.

For a while the Captain, Sir Monkeypants, and I were obsessed with playing against each other on the app this way and I think we’ve only played the actual board version once since we got the app. But that’s too bad, because the board itself is gorgeous, and it’s so much more interactive to play together at a table instead of each of us on our own couches with our faces in a screen.

So I do recommend the app, but maybe just so you can play on your own and brush up on your skills – for the family, bring out the actual board.

Side tip: while waiting for your turn, see how many little trains you can pile in a single stack!

Any family, with kids of any age, or even adults who are interested in doing a gaming thing but aren’t sure where to start, should pick up this game. THIS IS WHERE TO START. If you’re already into games and don’t have a copy of Ticket To Ride yet, your collection really isn’t complete. If you’d like to get a copy for Christmas, you can buy it locally at any of the specialty toy stores (Tagalong Toys, Mrs. Tiggy Winkles, Mastermind) or any of the comic book shops or Toys On Fire. Have fun!

2 thoughts on “Ticket To Ride”