On our sixth day we drove from Banff (actually Canmore, a much less expensive town just outside Banff where we were staying) up to Lake Louise and Moraine Lake. Both are very famous lakes, noted for their beauty and their famous turquoise water. The water gets its colour from “rock flour” – ground up bits of rock suspended in the water that comes from glaciers. Both lakes are glacier fed and as a result, are cold – but gorgeous.

Driving up gave us our first really good look at the mountains, and they were also lovely. We also passed under several of the bridges pictured below – these were built for wildlife to get over the highway and have reduced the number of highway animal deaths by 80%.

Unfortunately, this was the only rainy day we had on the trip, and it was cold too, so it wasn’t the best day for sightseeing or photos – but it was still well worth it. Speaking of the weather, Calgary and the Rockies have the craziest weather ever. We learned over the week to stop paying attention to any kind of weather forecast. On any given day it was cold, warm, cloudy, sunny, rainy, drizzling with sun, pouring, clear, hot. Often inside of a one hour time period. Just pack a bag with a waterproof jacket, gloves, shorts, a hat, sunglasses, a fleece, and extra socks, no matter what the forecast. Chances are you’ll need all of it.

Both lakes have tiny parking lots and are crazy, CRAZY busy with people. If you can, get there as early as possible, because they actually close the road to the lakes down when it gets too jammed with traffic – by lunchtime you might not be able to get in until the crowds clear after dinner. Much later we found out there’s actually an overflow parking lot and a shuttle for Lake Louise, but for Moraine Lake you’d be out of luck.

We went to Moraine Lake first – it’s a very secluded lake surrounded by mountains, famous for having been on the back of the $20 bill in the 80s. We hiked an easy trail around the edge of the lake to the head where the glacier water actually flows in. 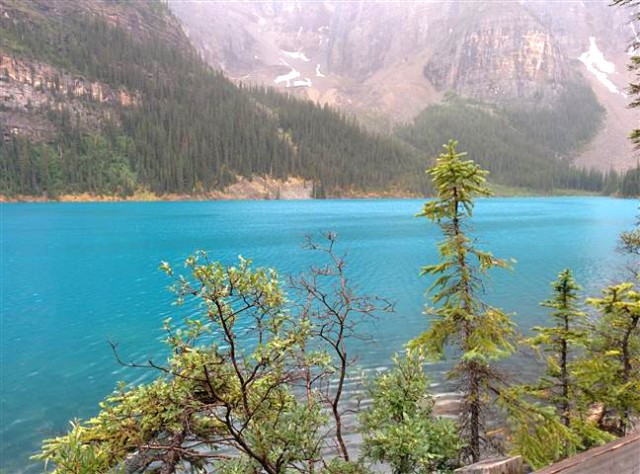 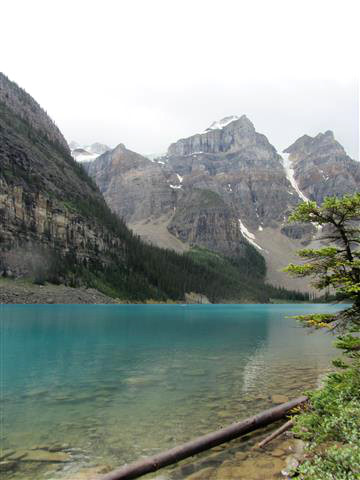 Yeah. Not much more to be said about that.

We didn’t want to rush the kids at Moraine Lake so we took our time, but that meant that when we wanted to move on to Lake Louise, the road was already closed (and I should mention, this was on a Wednesday during the day – Banff is so tourist-intensive that “work days” don’t really have any meaning). So we bummed around in Lake Louise (the town) for a couple of hours, having lunch and checking out the souvenir shops. There’s also a gondola in Lake Louise we could have taken up but I was still a little shell shocked from the first one, so we skipped it. Insider tip: make sure you go to the visitor centre in Lake Louise, where you can get inside dish on all the secret ways to get to the lake, from hiking paths to shuttle buses.

We were lucky that it started pouring rain, which I think drove out a lot of other tourists, and by 3 the road had reopened so we headed up to the actual Lake Louise. We did an uphill hike here to the Fairview Lookout, which overlooks the whole lake and the Chateau Lake Louise, and I’m not going to lie here – 2 km straight up almost gave me a heart attack. Holy cow do I ever need to work out more. 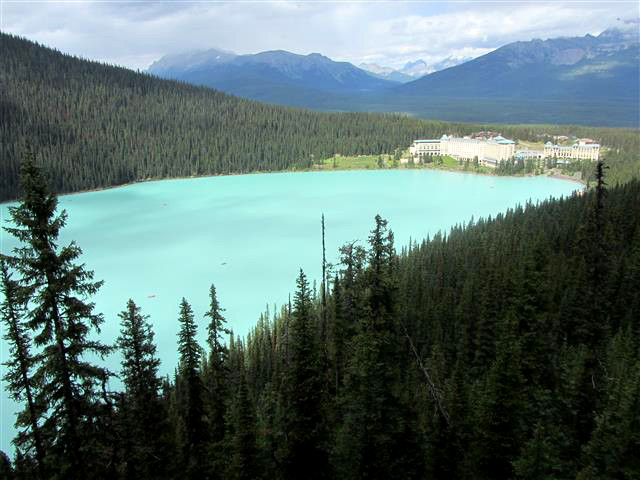 After that we wandered around the edge of the lake for a bit, but it was raining and we were tired so we eventually called it. Lake Louise is really extremely beautiful, though – totally worth it, despite the crowds. If you want a more secluded experience, you can rent a canoe and head out on the lake – there weren’t many doing this, so it was quite quiet on the water – or take one of the longer hikes that take you farther from the parking lot, which fewer people do (even on the Fairview Lookout, there were few other people). 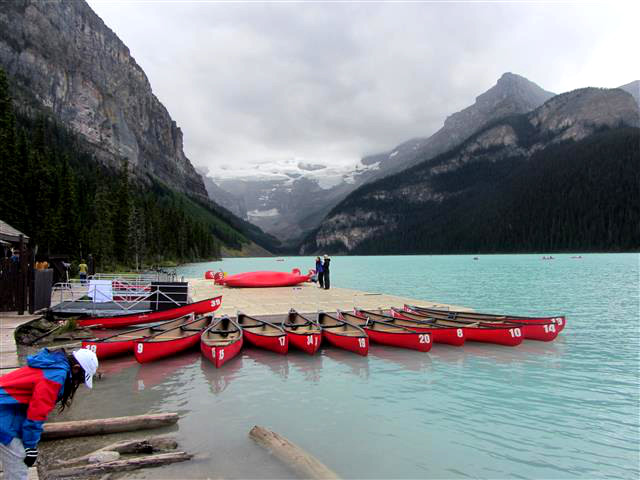 Verdict: Did you see those pics? AWESOME.

One thought on “Lake Louise and Moraine Lake”

We finished charting season three. Derek got a small bump by pulling Meredith out of the ocean before blowing it again, and Izzie and George are tanking. Now it's on to season 4 where we are playing New Intern Roulette...which ones will last the longest? Place your bets! #greysanatomy
I did suggest she get a bigger bowl but she is rather stubborn.
We finished ranking season two. Poor Derek...will he ever get out of the basement?
They're still allergic.
Waiting for Waitress. Next year, we really have to splurge on better seats...or many pairs of binoculars.
December 2019.
Fondue prep.
I have a growing teacup collection and my sister got me this Royal Albert one she saw online, just because. It's my new favourite. #royalalbertchina
Rainy night at Wesley Clover Park but the Magic of Lights was still cool.
Can't remember the last time I was so sick I couldn't do anything but wallow in the couch. Ugh.