I’ve caught the bug that the Little Miss suffered with all weekend long – a general need for one’s body to expunge everything you’ve ever eaten, ever, as quickly as possible, as violently as possible, from all available outlets. GOOD TIMES. I really, really hate being sick like this. When I have a cold, life continues as usual really, only with more grumbling from the kitchen area about how other people don’t have to keep working when they have a cold, and instead, other people get to sit on the couch and be fussed over. But illnesses that confine me, groaning, to the couch, are even worse, as all I do is fret about what isn’t getting done (work, housecleaning, feeding of the children) and how much my husband has to do (lunches! He had to make the lunches!) and generally spend the whole time feeling crummy AND guilty.

At least I have Olympic Coverage to keep me warm. Man, I could literally watch Olympics until my eyeballs fall out. Update: two more gold medals for Canada so far this morning! We are officially at the top of the leader board!

We are done with flag-making, although really I could have kept at it until I got through all 198 countries in the world, but sadly, we ran out of space along the bannister. The second image here is our official “leader board” – the flags are hanging by paper clips, and at the end of each day the Captain rearranges them based on medal standings. 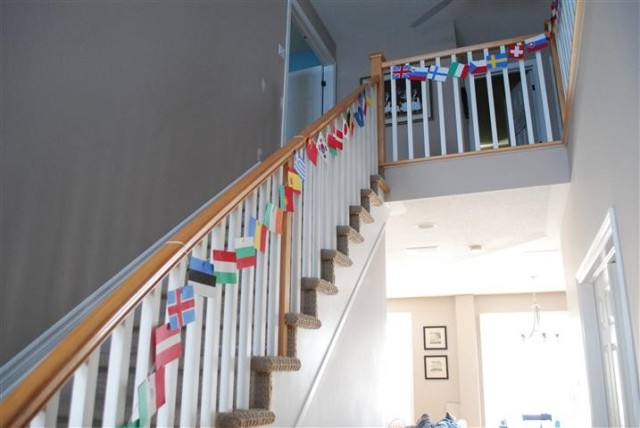 That Olympic flag at the far right there almost killed me. It was so intricate to get all the tiny rings to overlap just so, then figure out how to glue them all down successfully. People out there are working towards world peace or doing heart transplants, and here I am all proud of myself for figuring out how to recreate the Olympic rings in paper, but there you go.

The winter Olympics are like, 75% European countries (at least, the top contenders are mostly European, and those are the ones we made), and so making of all those European flags has us noticing that the Europeans are not exactly creative when it comes to flags.

For example, here is Hungary’s flag next to Bulgaria’s (apologizes for the crummy photos, I’m sick so I took them quickly by hanging my head upside down over the railing): 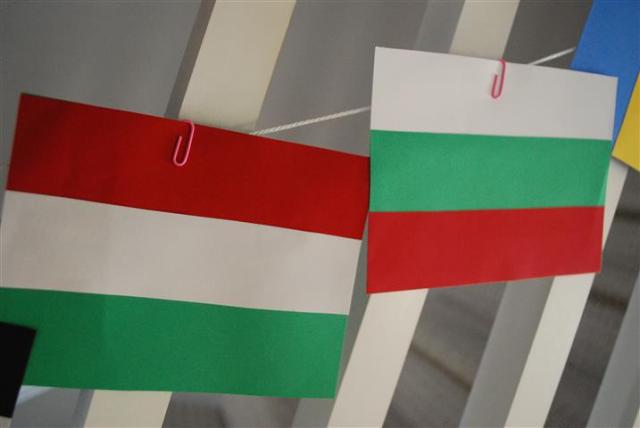 Really. These are their flags. Don’t you think, on the field of battle, this might lead to some confusion?

Here is Austria versus Latvia:

Difference, in case you can’t tell: one has a fat white line, one has a thin white line. When I see flags like this, I wonder if they have a long-standing feud. “I used it first!” “No, you totally copied!” “France! I don’t want to sit near Latvia any more!” Etc.

Here are Belgium and Germany, demonstrating the classic European technique of Turning-It-Sideways-So-Now-It-Is-Totally-Different:

My kids love these two – Iceland and Norway, doing a mirror image thing.

And here’s Russia versus The Netherlands, which in this household are constantly being confused for each other, despite the fact that Russia is the HOST NATION, and I’m thinking The Netherlands should maybe reconsider its flag design, before being bullied by the big guy into making it happen.

That’s not even the worst of these – here is Slovakia versus Slovenia, both of which have used a Russa-With-One-Piece-Of-Flare motif:

We didn’t make the flag for Serbia, but it’s ALSO almost the same – Russia-Upside-Down-With-Bling. SERIOUSLY.

Those last ones in particular could learn a thing or two from Asia – here is the flag of Kazakhstan:

Pale blue, featuring a yellow sun, outline of a yellow bird, and Arabic blingy design down the edge. Now that’s how you announce your presence with authority.

And we thought Canadian school kids had it hard, having to freehand maple leaves on Canada Day. Imagine being a Kazakh kindergarten kid and doing a flag craft. Good luck, kiddos.