I have tea with breakfast every morning in this one. I got it for my birthday from Sir Monkeypants and the kids, and they bought it because it’s BIG, and I want a BIG cup of tea every morning. You can never have too big a mug for tea, I say.

Gal Smiley is my most loyal companion around here and she has started having a cup of tea in the evenings, mostly out of solidarity with me, I think, as it is intolerable to her unless laden with three spoons of sugar and a half cup of milk. But she’s made it a habit, and she prefers her tea in this cow mug because, she claims, it is “smoother” than the others.

Sometimes Sir Monkeypants joins us for tea, too. He prefers this mug we bought at Universal Studios in Florida back in 2000 when we were young and carefree and childless and able to get up at 7 a.m. on New Year’s Day to go ride the Hulk coaster six times in a row until I nearly threw up. GOOD TIMES. 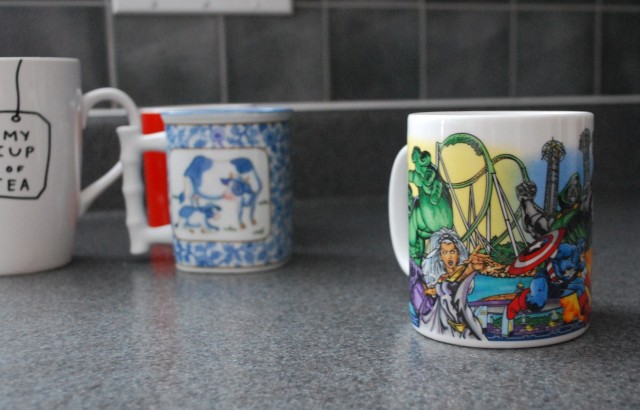 Every morning for breakfast the Captain has a “hot chocolate,” which is really a protein drink that is a milk-substitute for him. It mixes better if warmed up so he has it in this mug every morning, which was a birthday gift this year. If you can name the TV show that this references, you are my friend for life.

The Little Miss isn’t much into warm drinks but when she is cold she likes a hot chocolate – the real kind, with milk and cocoa – but she doesn’t want a big serving so I always make it for her in this little Belle mug. My mother bought it for her and there’s a matching plate, and we also have a Mickey and Donald set for the other two that see their fair share of use, but it’s the Little Miss that considers this little one her go-to mug.

Join us for a little something sometime, won’t you?