I had big plans to do a bunch of family board game posts during NaBloPoMo, and here it is more than halfway through the month and I’m just getting to one now. GAH. So here’s a quick little post on a game we broke out over the weekend – Qwirkle.

Qwirkle is a fast and easy little game that’s suitable for the whole family. Older players will be better able to understand the strategy but our eight-year-old can play with us with no problem.

We do tend to take a community approach to game playing, by the way. By that I mean, when we are playing with our kids (especially the youngest), we tend to talk out loud about possible strategies, and point out places where there would be a great move if only you had X piece, and we’re even not above having a peek at their cards/pieces and recommending various strategies. It keeps things fun and keeps everyone involved and happy. This approach works really well for Qwirkle if you can put aside the fact that if your kid makes move A, you could make move B for mega points, and instead just try to help them with what they have in front of them, and ignore your own tiles.

Anyway, the game is for 2 to 4 players (although I do think we have played it with all five of us, with no problem) and it’ll take you only a few minutes to learn; a game takes perhaps 20 to 30 minutes and there’s no setup so you can break it out before dinner and still be done in time.

Qwirkle is like a mix between dominoes and Scrabble. You have wooden tiles with coloured shapes on them – six different colours, and six different shapes. You lay the tiles on a table in an interlocking, crossword-puzzle style format making rows and columns. Each row or column either has all the same colour, or all the same shape. Like Scrabble, you can sometimes play a tile that fits into both a row and a column – say, an orange star that works with the orange row and in the stars column at the same time. 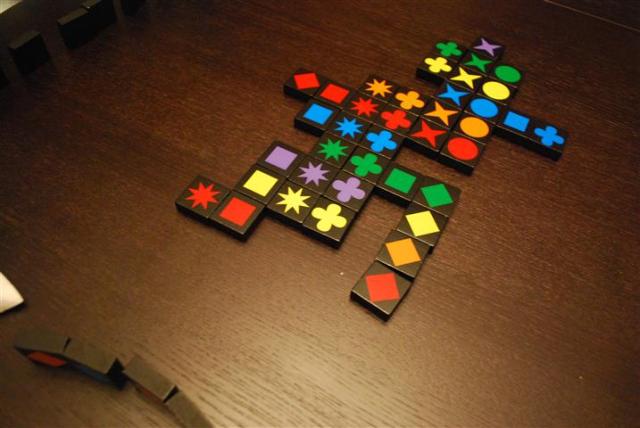 On your turn, you have a look at the six tiles that make up your “hand” and see where you can add to an existing row or column on the board. You can play any number of tiles but like Scrabble, they must all be in the same row or column. After playing, you score your points – you get one point for every tile in the row or column (or both) you played into. If you play the last tile in a set of six – closing the row or column – that is called a Qwirkle and you score the six points for the row, plus a bonus six points. You definitely want the Qwirkles – and you definitely don’t want to leave sets of five hanging around for others to pick off! 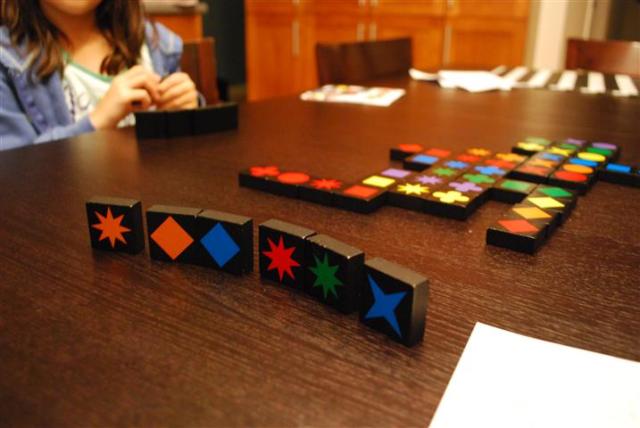 Draw tiles to replenish your hand, then mark the points on a piece of paper and at the end, the person with the most points wins.

Why We Love It

As I mentioned above, there’s no setup so you can break out Qwirkle and get it going in no time. It’s a good game for all levels and easy enough to play and learn that even people in your circle who don’t like games can be sucked into playing – we find this is a great time to bring out at Christmas or Thanksgiving or other big family events where you’ve got a mix of levels and ages and interests. It’s complex enough to keep us adults interested and the cute colours and shapes make it fun for kids, too.

It comes in a box but you store it in a bag, for use when pulling out tiles. That’s both good and bad – I like the bag but it can be awkward to put on a shelf of games. It seems like it would be a good travel game but the bag is actually pretty bulky – but you can buy a travel sized set with small tiles that fits in a little tin. That’s maybe a better addition to your game shelf, actually, unless you are playing with younger kids who would appreciate the bigger blocks.

Sometimes near the end of the game you can find yourself backed into a corner, where a piece you’ve been holding in the hopes of getting a qwirkle must be played and then someone else gets the qwirkle you were saving for, which can make one bitter. But in general I do find qwirkle to be fun to just play – even if you are losing, there’s always the possibility of a cool move around the corner to make you feel proud of yourself. 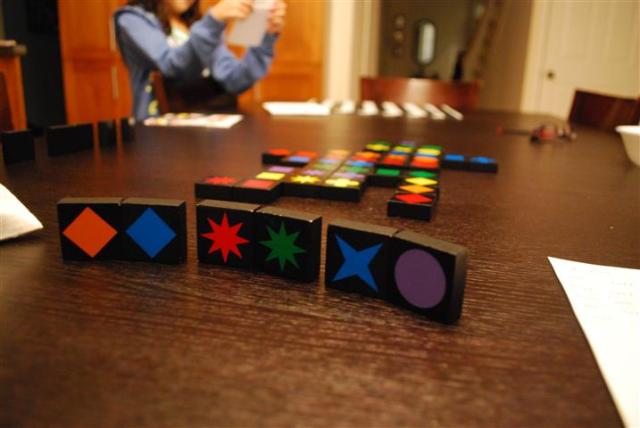 Families who want something a little lighter and faster to play will enjoy this game; it’s a fun little spin for ages 8 and up. It’s widely available at Toys R Us or any toy store. Have fun!

Flower.
Grade 8 grad was today... we're done with the grade school our kids went to for the past 14 years. Crazy!
Every three years I bundle up the stories I've written down about our home life into a book. It feels so good to see them bound like this. This latest one just arrived today.
BTS vibe outfit + good hair day = selfie.
Very cool gift from my mom...my babies on a puzzle! #decemberjoy
Prepping for fancy Christmas Eve dinner. #nanadishes #decemberjoy
Cookies for Santa. #decemberjoy
Telestrations night. #decemberjoy
Science experiment, don't ask. #crunchycrunchykoolaid #decemberjoy
Another day, another international pop hit. #decemberjoy