Part of the whole reason we went to Calgary in the first place was to go to Drumheller, the site where many dinosaur fossils have been found and home to the Royal Tyrell Museum, which features a stunning fossil collection. So Day Three of our trip meant hopping in the rental car and heading about an hour east to Drumheller.

Probably the most awesome thing about this whole day was the drive out, which starts with traditional prairie, where farms grow canola and each one seems to have its own little oil well churning away in the back field: 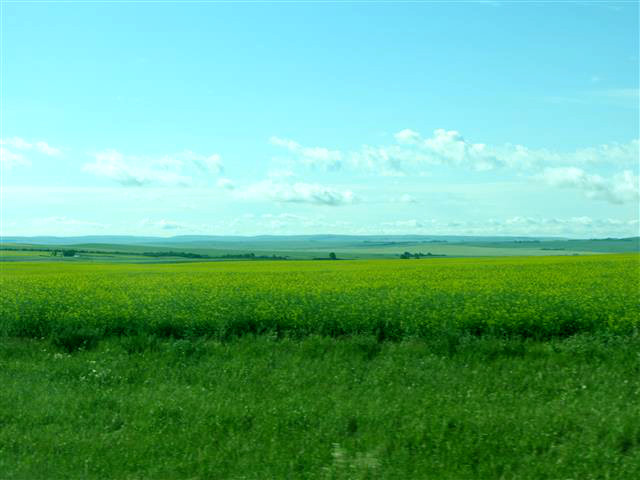 And then you quite suddenly enter the badlands, which are hills that have been carved out by glaciers, showcasing thousands of years of rock strata everywhere you look:

AMAZING. I actually had no idea the badlands looked like this. I probably took 100 pictures out the car window because the way they erupted out of nothing was just so incredibly cool.

We were pretty pumped up by the time we got to the museum, and here I must rant, because sadly, the Royal Tyrell Museum is THE WORST designed museum I have ever been to. EVER.

The problem is not the displays. The problem is that the museum wishes to take you on a journey through time, from the dawn of life to the ice age, and in order to impose upon you a chronological progression, you enter the museum at one end, then MUST follow this designated path through the ENTIRE museum before exiting. There is NO way out once you enter except to backtrack through the entire path, fighting crowds along the way. It takes two to three hours to get through this thing, there is exactly ONE “family” bathroom along the way, no food allowed.

Plus, it’s a lot of reading – a lot of skeleton after skeleton (which are, admittedly, very cool) and descriptions of that kind of dinosaur, with very little interactivity.

So let’s review: families with young children, trapped in an hours-long tube filled with do-not-touch displays, with no food and almost no bathrooms. GOOD IDEA, right?

Our kids are older so the whole event wasn’t quite as dire as I make out, but for me the biggest problem was that there were fun interactive events and lectures going on all day back at the main entrance, OUTSIDE the museum. But to get to them, you had to – you guessed it – fight your way through crowds back through the ENTIRE PATHWAY to get there. So we ended up just skipping them all, because it wasn’t worth it for us to battle our way back to the entrance for a workshop, then battle our way back into the museum again.

I’d like to recommend to the Royal Tyrell Museum that they consider the layout at the War Museum here in town. It’s also chronological but there’s a central hub, with loops going off of it, so you can do say, WWI, then return to the hub for a bathroom/snack break, then do WWII, then back to the hub again; you can also choose to skip ahead to WWII directly if that’s what interests you and you have minimal time. There’s no need to be so heavy handed with the crowd management, Tyrell Museum!

Also, one more thing I wanted to mention: almost all the “interactive” components that were going on at the museum – mock digs and fossil recovery, that sort of thing – cost extra. Not cool, museum, not cool.

Verdict: Worth it for sure, for the drive alone. Worth it to go to the museum and see the dinosaurs – we learned a lot – but be prepared to fight the man in order to set your own pace and schedule; make sure everyone eats and pees before entering The Path Of Doom, and check the activities schedule first and if there’s a must do, try to schedule around it so you can do the whole path before or after the activity. 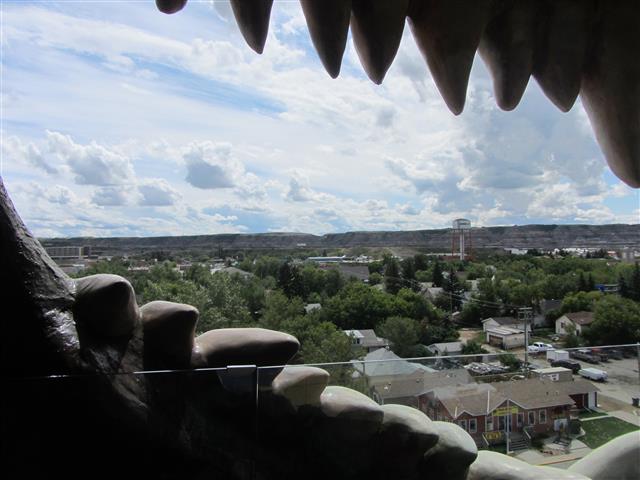 Verdict: Well, it’s a must do for the cheese factor, but really skippable if you can bring yourself to actually skip it.

We ended our day with a stop at the hoodoos – really cool rock formations formed by erosion, with a protective cap that stops them from disappearing completely. There’s a designated stop along the highway where you can get out and see them up close, and climb all over the hill, which we did. The hoodoos were amazing, and the whole experience was beautiful and unique. It was everyone’s favourite part of the day – and a highlight of the whole trip – and you should definitely go if you are ever in the area. 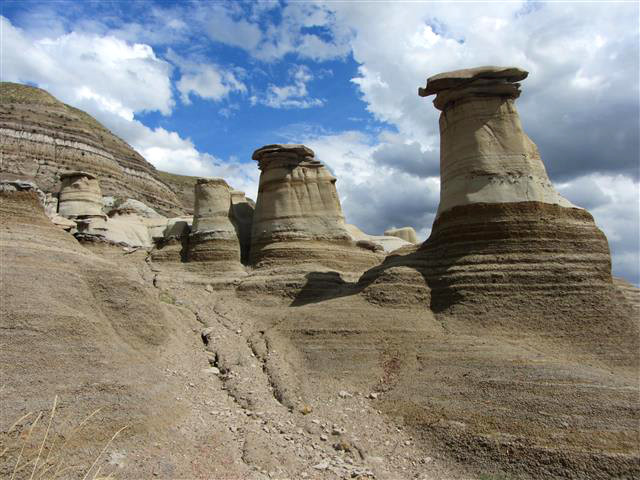 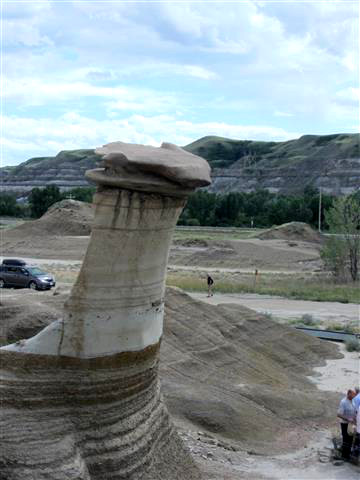