Here’s a recent picture of the back of my two oldest kids, Captain Jelly Belly on the left, Gal Smiley on the right. 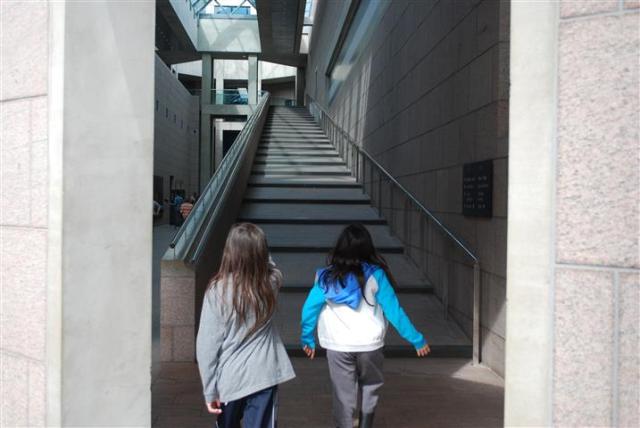 They’re only 18 months apart, and Gal Smiley has started to shoot up while the Captain has not, and as a result they are now just about the same size. Add to that the fact that the Captain has now hit the three year mark without a haircut, and their matching uniforms of track pants, t-shirts, and hoodies/sweatshirts, and they’re getting pretty hard for laypersons to tell apart from the back. They’ve started to be quite commonly mistaken for each other by kids at school, their aunts and uncles, family friends, and their soccer coach.

When they were young, like 1 and 2, people at the mall or the grocery store used to ask me all the time if they were twins. “No, just close in age,” I’d say. But now, it seems like prophecy. I had to buy a second pair of size 3 rubber boots, and a second pair of size 3 soccer cleats, because they’re the same size. They’re both a little cranky these days, a little sassy, as they are both hitting the same preteen angst at the same time. Quickly our house has become divided, two and one, as the older two become like a matched set, tweenaged salt and pepper shakers. I guess the benefit is only having to grope your way through the grey and hazy Parent Of A Teen years twice, once for the dynamic duo and then just one more time for the little one bringing up the rear. Lucky.

I wanted to get a picture of them from behind for this post, and it turned out to be not so hard. In fact, looking back at my photos from the past few years, there are so many taken from behind. As I pause to get out the camera, stand still for just a moment to take a snap, they’re already gone. Moving forward, unable to slow down, deep in conversation or looking eagerly ahead to the next bend. There are times when, in the minute it takes me to get the camera ready, they’ve already gone to maximum zoom mode, as far away as they can be and still be recognizable through the camera viewfinder. I have to snap quickly, another picture of the backs of their heads to add to my collection, and run to catch up.

Right now I can still catch them, but soon they’ll both be running out of my reach. Two kids, the same and yet totally different, on the same path, walking it with their own style. I’ll blow you a kiss from back here, my dears.

One thought on “Running Away”