And we’re off! Summer vacation has begun, and that’s good, and bad, but mostly good. For example, yesterday we went to Upper Canada Village, a place I swear I will take the kids every year, but we never get around to it, and so this year I knocked it off early. And despite a drizzly day and my fears of three kids imploding given a whole hour’s worth of driving with no video games (OMG CERTAIN DEATH), we made it.

And know what? We had The. Best. Time. The kids loved it! They actually wanted to learn about history. They actually begged to stay longer. They were hypnotized by the mills. They loved the animals. They enjoyed the shows. They had a million questions about the War of 1812.

And then! They were all so exhausted at the end of the day there was total silence on the drive home.

AWESOME. Especially considering I am wondering a) how to get one of those glass dividers limousines have for the van, or alternately, b) how to get all three kids to move the way back row of the van so I don’t have to hear the bickering, GAH.

So speaking of the down side of summer, I am already quite frustrated at how much I have been expected to act as Program Director for this summer. In the past I think I have been spoiled, because if we weren’t doing a day trip, I was able to just strategically leave out a bin of LEGO or Playmobil, and the kids came across it and were all, “Hey, what’s this?” as if they had never seen it before, and I didn’t hear from them for three hours. But now they are all boooooored, so booooored, want to DO SOMETHING, Mom? Mom? Mom?

(Or rather: want to suggest a hundred things, all of which I will say “no” to? DO YOU?)

For example, today I took them to the park, and since we were already out and about in the van I thought I’d stop by the Far Park because it has swings, whereas the Close Park does not have swings. I had this fantasy that I’d sit in a nice shady spot with my coffee and enjoy the weather while basking in the glow of happy, active children.

And then one kid was all, “Mooooom, come play tag with me,” and if you know me at all, you will know that although I can be a bit of a Busy Beaver when it comes to Planning Stuff, I am not at all interested in activities that involve sweating. So I was artfully dodging that one when another come came up all, “Moooom, there’s nothing to doooo, will you play frisbee with me?” and I was all, “What is wrong with your sibling RIGHT HERE who is looking for something to do with someone else?”

And while they were both, “Mom, are you done your coffee yet? Now? Now? How about now?, the third one, who loves swinging, was all, “Moooom, there are no monkey bars here, no mooooooonkey baaaaars, and also, I need to pee RIGHT NOW,” and so I gave up and we came home.

I’m thinking perhaps the first week of summer vacation is always this way, just trying to find our way to a rhythm, trying to negotiate the video game rules, learning anew that their brothers and sisters can actually be entertaining from time to time. Remind me next year to come back and read this post when I’m on my sixth cup of tea trying to soothe my throat from repeated declarations of, “NO, you have played ENOUGH Clash of Clans for one day!”

Really, summer IS awesome, and will BE awesome, I am just in a mildly ranty post-park mood.

So! In more personal awesome news, two things: first, Dance! Show! has returned, and is now at the top 20 stage, which means plenty of posts on that topic coming your way soon.

Second, I am going to be on Our Ottawa on behalf of SavvyMom.ca again this weekend talking about stuff to do with your kids around town in the summer. This time, Lucy Van Oldenbarneveld was away, so I got to hang with Adrian Harewood instead: 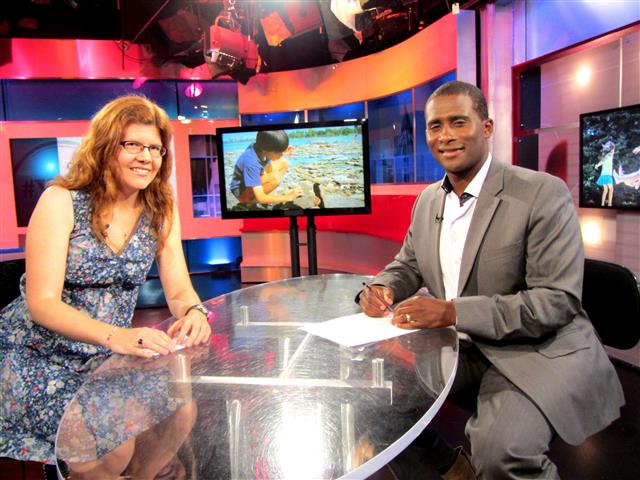 5 thoughts on “Awesome and Not Quite as Awesome”