Man, this November is kicking my butt. I have no idea how I ever managed to do NaBloPoMo – between Christmas shopping and work and activities and parties and sports and Sir Monkeypants being away in California for 10 days, I barely have room to breathe. The PVR is all backed up and I keep forgetting to do laundry and I think I have been to the Chapters about 40 times this week because I keep adding someone extra to the Christmas list. Breathe, Lynn, BREATHE.

I have about 25 blog posts rolling around in my head, but no time, so today I bring you Speed Blogging: Two Minutes or Less on A Variety of Topics. Alternatively: Blogging As It Was In 2003.

A few weeks back I rented the movie Diner, which was made in 1982 (loved it, by the way). There’s a strip club scene in it, where a gal dances around in a sparkly bikini, and it was so obvious how much our ideals of physical beauty have changed, and not for the better. This girl was lovely, and, if you know me in real life, at least 15 pounds thinner than I am, and I am not a large person, so yes, slim and fit. And yet, due to her lack of six-pack abs and surgically enhanced areas and buffed and toned skin, she looked like an average person, and it’s odd and terrible how little we can tolerate that sort of thing in our ads and catwalks and movies these days.

The very next day I was watching TV with Sir Monkeypants and a Victoria Secret ad came on, and those models were, in comparison, so unhealthily thin, so oddly proportioned, so weirdly tanned and shiny, it was glaring. And I was horrified.

I know everyone says this all the time, to the point where I kind of nod and agree that our beauty ideals today are unattainable and bad for self-image, then not really register it. But this was the first time I think I’ve seen such an obvious contrast presented to my brain, and my brain did not like it, no siree.

It was my birthday on Monday, thanks to all well-wishers! I had a great day, actually – although Sir Monkeypants is still in California, the kids gave me gifts that he’d left for them that were awesome. I spent the day getting some work done, doing puzzles, eating a metric ton of squares from Totally Squared, and then watching National Velvet with the girls, an awesome family film about horses and female empowerment.

But the best part about my birthday is that it marks the official open season on Christmas, specifically Christmas Music. So on Tuesday I busted out the Christmas CDs and put them in the van, and was bopping along in no time. But the BEST best part is that the Captain, much like his father, has decided he DESPISES Christmas music, especially my beloved Hi-5 Christmas CD, and so that only means I need to play it MORE often and MORE louder and me and the girls will sing along MORE, while he squirms delightfully in the way-back of the van. DELIGHTFUL.

This morning he said that if he were in The Hunger Games, and they used Jabberjays against him, instead of having them make sounds of his family screaming, they could just torture him by having the birds sing Hi-5 Christmas songs. SNORT.

Two Seconds on The Hunger Games

The Captain just finished Catching Fire and now is reading Mockingjay, which has totally re-awakened my embarrassing passionate love of all things Hunger Games, and he is begging me to take him to see Catching Fire on Saturday morning as early as possible, and I just never thought I would love being a parent SO MUCH. Related: we are both getting little Mockingjay pins through Scholastic and DAMN RIGHT we are going to wear them on our coats like some kind of cult.

Had the pie party this month. There was SO. MUCH. PIE. It was AWESOME.

Pictures! These are just of the 7 pies I made; overall there were like, 30 pies. Click to enlarge. 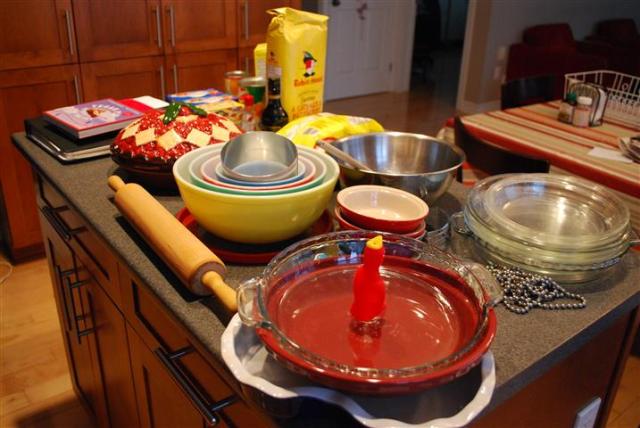 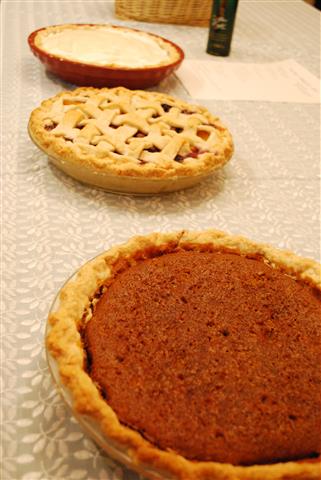 First haircut in a couple of years or so.
Business casual.
Feelin' cutsey today.
Bought this tiny creamer for $2 yesterday so now I can have tea in my office in style.
Flower.
Grade 8 grad was today... we're done with the grade school our kids went to for the past 14 years. Crazy!
Every three years I bundle up the stories I've written down about our home life into a book. It feels so good to see them bound like this. This latest one just arrived today.
BTS vibe outfit + good hair day = selfie.
Very cool gift from my mom...my babies on a puzzle! #decemberjoy
Prepping for fancy Christmas Eve dinner. #nanadishes #decemberjoy